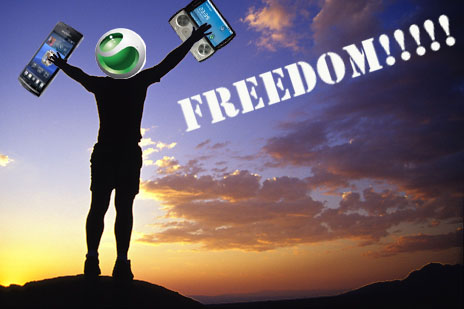 This is how things are supposed to be. Sony Ericsson has locked bootloaders on its phone. Why is this a good thing? Because it keeps people from messing up their phones. However, if you do want to mess up your phone (and if you’re reading this you probably do) the website, as promised, has just gone live giving you the option to unlock  said bootloader in the name of freedom. And also some kickass mods. Some stipulations are in place, this will most likely void any warranty you have as well as possibly decreased performance and a non-functioning product. If you’re willing to look past all that (and please good devs do) the link below is all you need to get started loading up some custom software on that new Xperia phone of yours. More opinion after the break.

I’d love to say I’ve found one ROM that meets all my (sometimes ridiculous) needs, is super fast and stable, and supports all my apps, but it just hasn’t happened yet. I’m addicted to the idea of managing my blog from my phone so I’m hesitant to go to Gingerbread again, but I’m getting kind of annoyed with some of the things on Liberty 2.0. Yes, the pros still outweigh the cons. The main pro for staying with Liberty at least another week being the massive amounts of customizations. My Oreo Slice + 4G + Slight Honeycomb hacked together theme looks just fantastic to me. Custom transition animations and custom pulldown back ground help me make my phone truly mine. More on this subject and others after the break! END_OF_DOCUMENT_TOKEN_TO_BE_REPLACED

I’m currently having something of a identity crisis with my computer. And I blame VMWare! Switching between OS’s isn’t something most people do on daily or weekly basis, let alone a couple times a day. Most stick with the one OS they have installed and if they switch to a friend’s computer then the possibilities change. But running 3 operating systems on one physical desktop? I can’t think of too many people I know that do that…

The main problem began when I was about 12 years old. My trusty custom built desktop with a 700mhz AMD Duron (blegh even the name screams cheap), 512MB SDRAM, Nvidia GeForce AGP graphics chip and a whopping 80GB hard drive had finally stopped booting Windows. Nothing was wrong with the hardware. I just thought it was getting cluttered so I reinstalled XP with the CD from my uncle. Yeah, turns out it only had that one license and he’d used it on another computer. Piracy out of the question, I began innocently poking my head around the Intertoobs for a free alternative. One kept coming up: Ubuntu Linux. Thus beginning my obsessive following of one of my favorite OS’s of all time. It was incredible all I could do to that OS. It was ridiculously faster than Windows XP on my system. I felt like I had a usable computer again! It was beautiful! I kept installing this on any computer I used throughout the years and always had a LiveCD of the latest version on me. Ubuntu 10.10 is the latest I have installed (Natty Narwhal is coming!!!) and it’s been running smooth since the day I got it. Improved included drivers have really made my life simple, but the “upgrade” to GRUB2 and Plymouth for the boot manager really put a stifle on some of my favorite customization options. I’m sure eventually something will come along, but for now I’m stuck with a semi-plain startup and login experience. Good thing the rest of the OS remains as flexible as ever with improved Compiz integration and the migration to Gnome 2. It’s kept me going for close to 9 years now.

Then came Windows 7. It actually drew me back to the Windows fold again my senior year in high school. Sure I’d been saddled with WinXP again at school for all the domain usage of course. And I was at home unfortunately forced into the Purgatory between Windows 7 and XP: Vista. I hated that OS with a burning passion. Although fairly excited when it first came out I was disappointed by its loathsome driver support and sluggish performance. Why did my first 700MHz Duron seem faster than my parent’s 1.6GHz Pentium D (Dual core) with 2GB DDR2-RAM? That OS is still an ugly scab Microsoft is trying to pick and is regrettably still chugging along on my parents computer. Thank God for Windows 7. It truly seemed like redemption for me. I’m sure that my parents computer would probably run Win7 just fine (plus the benefits of reinstalling Windows for the first time in 6 years). My personal desktop is currently in a dual boot with Windows 7 and Ubuntu 10.10. I believe it s 60/40 split with Windows the larger cause it needs it for all my games. The redesigned taskbar and the fixed UAC annoyances were soothing salve on the burn left by Windows Vista. Improved performance was a plus as well as increased and much better supported drivers. All my games ran perfectly in Win7 and my only real complaints so far have been with file transfers (Still dismally slow and inconsistent) and visual appeal. I guess I’ve just been spoiled with the other OS options out there.

Like my new favorite OS X 10.6.4. Yes, I know 10.6.6 is out and is apparently a big deal but this is the latest version I’ve got to be at least 90% usable on my AMD hardware. I can’t tell you how much of a pain in the ass getting this thing to boot even in a virtual machine was. The good news is after a couple weeks of fevered forum hunting and various patch downloads I have a beautiful 1080×1920 Mac OS X 10.6.4 desktop running swiftly on my AMD X4 setup. With AMD’s hardware virtualization enabled my “Mac” has 2 cores at 3.4GHz and 1GB of 800MHz RAM. The RAM specs are inaccurate to what I have for the VM, but it’s not that big a deal (Supposed to be 2GB @ 1333MHz). I can’t express enough how much of a difference the smooth, visually integrated system integrated into OS X makes to your over all experience with the OS. Yes, there are some really powerful creative apps out there for Mac only (Garage Band being my most used) but the most impressive part to me is how unified the whole OS looks. All the menus, toggles, installers, icons, and especially the animations make me forget for a little bit that I’m using a computer. Sure, you can’t change a lot of it like in Ubuntu, but it provides a incredibly superior feel to the OS than Windows 7 does. I still feel like I’m trying to convince the computer of what I want to do in Windows. In OS X I just feel like I’m using a computer; it’s a natural extension of me into the computing realm. I’m really feeling OS X will get a lot more attention from me in the coming weeks, especially once I figure out how to transfer my VM setup to a bootable hard drive.

For now, however, it’s dual booting between Ubuntu 10.10 and Windows 7. Inside Win7 I’ve got my VMWare running OS X 10.6.4 fullscreen and it is commonly being used. Will my computer ever have true identity as only one of these fine OS’s? Odds are it probably won’t. That’s because I appreciate the beauty of choice we have. I don’t have to only run one! And I love it! But I’m sure it’s got my poor computer’s mind spinning…

Until next time, peace out!

P.S. Whichever OS is most popular will get its own in depth review first!