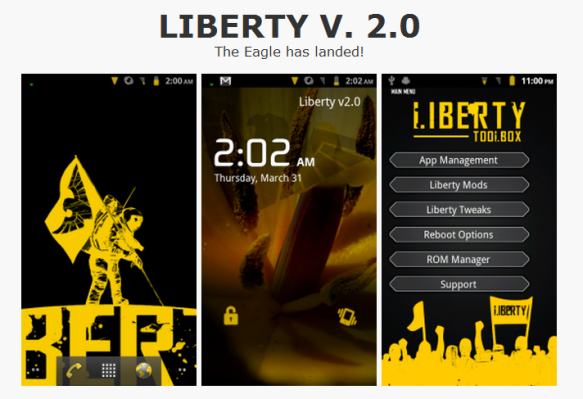 I know this is a little belated, but I’ve finally got internet up and running (no thanks to city’s free wifi) to get some blogs in. First up: Gingy is now officially gone. Sad, I know, but believe me you I was sad to see it go too. Rest assured, the instant ANYTHING Gingerbread based and custom is posted, I’ll be flashing and blogging. Until then, I’m already running the latest and greatest Liberty for the Droid 2 and Droid X. Seeing as I only own a Droid 2 currently, anything I post about the ROM is from that standpoint.

Early Impressions: Fast! I didn’t think a Froyo ROM could really step into the huge shoes left behind by even the stock Gingerbread, but damn did those Liberty devs do a good job of cleaning up this ROM. It just goes to show how big a difference it can make between newer stock software with bloat versus a streamlined custom ROM. Trimming the fat of the stock ROM really makes this phone fly. It’s not a totally universal “flying” type speed like Gingerbread, but it is a significant improvement over both stock Froyo and my Apex ROM I was running before. It’s also easy to manage and 95% AOSP so I felt right at home from the get go.

More on the rest of the ROM after the break.

Appearance: The stock theme for Liberty 2.0 is largely the same with some new wallpapers (very tasteful) and slightly refined icons. It’s a fresh enough look with more of the same for fans of the original. I however, am not a fan and quickly and easily changed the theme over to the ever popular Oreo Slice theme. This was easy to do via the Liberty Toolbox from the Android Market. I also applied some custom Metamorph themes. All worked well, even my new favorite the fake 4G LTE icon that replaces your stock 3G icon. That coupled with the easy text banner changing from the Toolbox made a pretty slick looking 4G look on my R2D2. I also easily changed the boot animation to the R2D2 one with sound and the boot logo to a custom Star Wars/R2D2/Android one I’ve made. The pulldown bar looked fine stock, but even cooler with the Oreo Slice theme. I like how monochrome Oreo Slice. The stock theme was just too yellow/golden for me. I’m glad there was an easy way to change it.

Performance: I haven’t had enough time to judge it based on battery, but at the same ULV 1.1ghz ondemand settings I’ve been able to easily pull in 18 hours on it so far. That’s with some pretty heavy browsing/downloading, one hour of talk time and moderate texting. Nothing stellar, but I’ll report back on that in a couple days. Speed wise the overall feel is very brisk. It is only slightly laggy behind Gingerbread, but coming from another Froyo will be a decent upgrade. It doesn’t feel “slower” than Gingerbread, just not as blistering. Make no mistake, you will not feel dragged down by this ROM. I really enjoy how fast my home screen (still ADW EX till I can afford to try SPB Shell 3D) renders and slides. Much faster than the stock Gingerbread, as a matter of fact. Browsing is just as quick, Flash doesn’t perform quite as well but still very usable. It runs my WidgetLocker lock screen quickly too, one of my major annoyances with Gingerbread. I’m very impressed with the work the devs put into this ROM and it really shows with how snappy apps load and switch. A fat-trimmed 2.2, it appears, can beat out a bloat-ridden stock 2.3.3. Network speeds remain unaffected, despite my best Metamorph efforts.

Annoyances/Bugs: Usually a decently long section, I have yet to find much wrong with this ROM. Granted, I’ve only had it one day and I’m sure things are bound to come. The stalwart bug it seems would be the lack of a charging light. When plugged in by USB the light by the plug on the phone will not come on. This is a bug in pretty much all 2.2 custom ROMs and really isn’t much more than a mild annoyance. On the white case of my R2 it’s actually OK because the LED was too bright and shone through a good deal. I’m working on getting this figured out, but with the latest MotoConnect drivers installed, my phone refuses to connect for USB Mass Storage. It pulls up the “CD” that has the drivers on it, but the micro sd refuses to mount. I’m pretty sure this isn’t a bug and maybe I’m just not doing something right, but it’s really annoying when I took screenshots from the device. I’ll fire up the ol’ Eclipse SDK and grab so for ya. I also miss the Motorola Dialer, it really felt a lot more useful than the stock one and I wonder if there’s a way to integrate it into an “AOSP” ROM. There’s also no song track skipping, and boy do I miss that from Ultimate Droid on my Droid 1. I think I’ve just been spoiled by Blackdroid. Also of note is the almost complete lack of any Google apps. This might seem like a no brainer, but when you depend on a GPS to get around and all of a sudden you don’t have Voice Search or Google Maps/Nav it becomes quite a hassle. That’s it mostly for annoyances, just me bitching about little details. Don’t let any of these bring you down, this ROM is great.

Overall: Liberty 2.0.1 actually might steal a little thunder from the Gingerbread leaks if people really give it a chance. It is possible to have a remarkably quick Froyo-based ROM. Especially with the fantastic work of the devs over at DroidForums.net, this is definitely a ROM worth trying. Even if you made the jump to Gingerbread, I would recommend at least giving this a shot. I’m sure you’ll fall in love with all the customization options again just like I did. Man did I miss them on the stock ROM. The main R2D2 goodies flash from TeamBlackHat didn’t change my boot animation, but it did give me the R2D2 clock widget and the ESB Binoculars app. It also copied over all the notification ringtones from R2D2, just in case any R2D2 Special Edition owners are reading. There’s also a Star Wars theme for WidgetLocker that someone made available to me. I’ll be posting that and more helpful hints in a “Themes” post later. Till then, give this ROM a flash, just be sure to SBF to 2.3.20 for Droid 2 and 2.3.40 for Droid X users if you jumped to Gingerbread. I have pretty much no regrets about sticking with Froyo for a little longer. As much as I love being on the bleeding edge of technology (I’m writing this from my 11.04 Ubuntu Beta desktop), I can wait for some custom 2.3.3 based ROMs to come out. With the speed, stability, and ease of customizations that Liberty brings, it’s a no brainer install for any hardcore or newbie Android user. Thanks for reading, and enjoy the ROM!!!

Download the Droid 2 and Droid X Version in the original thread Here!

If you want to support their Team Liberty, click Here!

I’ll have screenshots up in a couple minutes. Thanks again for looking!